Friday night, I hear a noise coming from the kitchen. Since Mickey was out and about, I knew it was most likely him. I walk in and I see him wandering around his pet carrier, which was still out from earlier in the day when I had him in there so I could clean his cage. He kept poking around near the carrier door, so for ha-has, I opened the door and then went back to what I was doing.

A short time later, when he hadn't returned from the kitchen, I went in to check on him, and this is what I found: 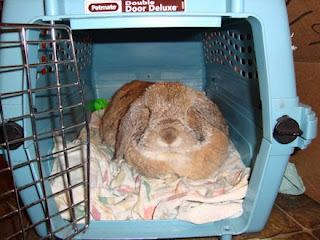 Now you must understand this is the same rabbit who, when being placed inside this same carrier, shows his appreciation by digging at the sheet, tossing everything he can and trying to gnaw his way out. It usually takes him a good 15-20 minutes to decide that trying to get out is generally futile, so he might as well settle down and deal with it.
The next few minutes were spent bopping in and out of the carrier, and I managed to get one video good enough to display here:

I'll have to remember to empty the carrier more often, I guess.

Of course you know the next time he's got to go in the thing, he's still going to have a hissy fit.
Posted by Jade at 1:50 PM 2 comments: 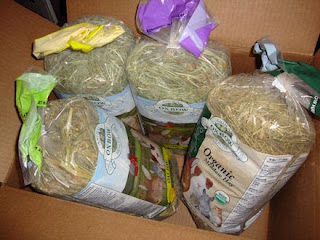 A smorgasborg of grassy goodness arrived yesterday from one of my favorite suppliers, Leith Petwerks (Note: Any and all product endorsements made in this blog are done without compensation, I just like them...although Mickey says he is open to flat-out bribery.)
This is my latest attempt to get the wascally wabbit to eat more of the stuff he is supposed to be eating. Hay is essential to a rabbit's diet in order for them to get the fiber they need for their digestive systems to work properly--but I have yet to get a single one of any of the rabbits I have owned to eat more than maybe a nibble at best. Mickey has been better about it than the rest, but even he will turn his nose up at it more often than not. Like his predecessor, Karnage, Mickey seems to think hay is more for peeing/pooping on than eating, which is why his litterbox is filled with hay instead of litter. I have tried a variety of hay mangers in a variety of positions. I have cut back on treats, pellets and greens-within reason-in order to get him to eat the hay. I had some success getting him to eat hay that had been stuffed into toilet paper and plastic tubes (since Mickey will eat pretty much anything if it's on the floor in front of his nose), but lately he's tired of that, so I'm trying a variety of different hays to see if perhaps there's one he might like more than the standard timothy and orchard grass he's been getting.
The new hays are (from left to right in above photo):
It's going to take some time before I know for sure if any have been a success. His Majesty is a supremely picky eater; it can take weeks for him to decide if something's worth even tasting. Once he does get around to trying it, like or dislike becomes pretty obvious. It's just the waiting part that aggravates me.
Even if it turns out he doesn't like it, at least the hay won't go to waste; it'll just end up in his litterbox. I just wish it would go through him first. 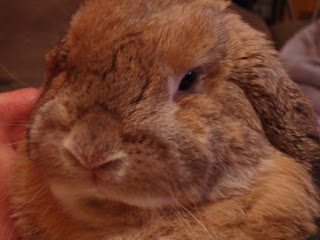 When Wabbits Attack (or "I just want a little love--is that so wrong?")

I posted this on my Facebook account a while back; this is a video I took with my old cell phone of my 18-year-old son (heretofore referred to as "the boy" because he would be mortified to see his name in a blog about rabbits) with Mickey about a year or so ago.

The boy and Mickey have a love/tolerate relationship--my son likes to play with Mickey on occasion and will pet him and give him treats when he's in the mood to do so, and, while Mickey enjoys the petting and treats, he will also attempt to chin everything within reach the boy owns to let him know who's boss***. Back then, though, he had only been with us a few months and just couldn't understand why this person wasn't showing him all the love and affection he deserved. (He also seemed to have a thing for fresh-out-of-the-shower feet.) Even now, if you don't pet him as soon as he hops over to you, he will assume you don't see him and will rise up and paw at your leg to get you to notice him. If that fails, he will tug at your pants leg. Unfortunately, the boy wasn't wearing pants.

***Note for non-rabbit-owning people: chinning is when a rabbit rubs its chin on something or someone in order to mark it using the scent glands located under its chin. You may see cats do the same thing. It's a sign of ownership of said item or person.
Posted by Jade at 10:27 AM 3 comments:

Welcome and an Introduction

Hi there! I am Jade and this is Mickey: 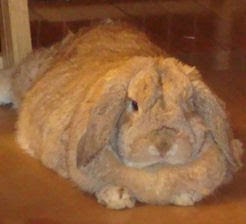 (Mickey says he's not fat, he's fluffy.)
Mickey is my current rabbit; he is an almost 3-year-old mini-lop (at least as far as we know, since he's too big to be a Holland lop and his ears are too small for him to be a French or English lop) that I adopted from the Berkshire Humane Society on May 1, 2008. You'll be hearing a lot about him here.
I have owned rabbits on a regular basis for about 20 years, give or take. As those of you reading this who own rabbits know, they are far more than just cute and loveable balls of fur bouncing around. They can be willful, persistent, loyal, irresistable, demanding, loving and tempermental as all-get-out. This blog is my outlet for expressing my appreciation of and exasperation with them. There will be photos, videos, and stories of my experiences with them.
My obsession does not end there--I am also a collector of almost anything rabbit-oriented. I have glass rabbits, stone rabbits, needlepoint rabbits, stuffed rabbits, rabbit jewelry, rabbit mugs...you get the picture. I will also be displaying some of my collection in here. If anything, it will probably cement my reputation as the craziest bunny lady out there. Enjoy!
Posted by Jade at 4:14 PM 3 comments: