You better watch out... 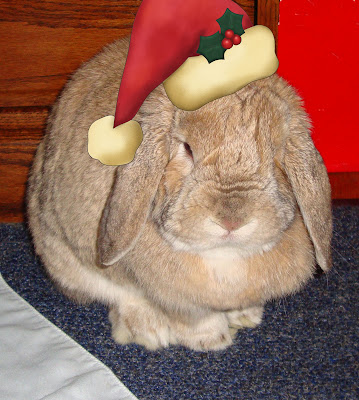 ...Santa Mick is comin' to town.
(and cryin' and poutin' are nothin' compared to what you'll do
if there's no hay cookies waiting for him under your tree)

Thanks ever so much to everyone and everybun for the birthday wishes--they were so very much appreciated. I had a lovely 50th birthday...at least until the end of the night, when it turned out that hubby had one last gift for me: his cold. Fortunately, I only had one week of misery, while hubby had almost three. We're both fine now except for the occasional coughing bout, but it did put me even further behind in my projects than before (after all, the last thing I need to do is include a dose of the plague in with my cards and blankets).

I was planning to do a humongous calendar giveaway for Christmas this year similar to what I did last year, because Mr. Mick is not only appearing twice in the Bunspace calendar for 2013, but he is also in the House Rabbit Connection calendar for 2013. All I can say is that there is a slight change in plans, but I will say that if you would like one of Mick's holiday cards (and I don't already have your mailing address), please email me at jade@jademyst.com and let me know ASAP. First come, first served and all that.

As for His Majesty, he has been trying (and failing) to stay off of Santa Paws' naughty list as usual. He gave himself quite the scare last night while attempting to help himself to his container of hay cookies on my computer desk. I was sitting at the computer typing up an invoice, while Mick was perched on his footstool next to my chair. Suddenly, there was a scrambling, wriggling ball of orange fur half in my lap and half on my keyboard! Mick had jumped up from the footstool and semi-landed in my lap somehow (quite a feat for a middle-aged bun of excessive...fluff) and was simultaneously freaking out over his accidental accomplishment and trying to escape back to his footstool, while I was trying to scoop him up and get him secured against my chest so he would neither fall to the ground nor accidentally hurt himself with all his flinging himself around. Finally, I got him against my shoulder (thank gawd my chair had a high back, I think he would have leaped off my shoulder in his panic) and got him calmed down. He was wide-eyed and breathing hard, but otherwise fine, so I began stroking his nose and giving him a massage until he was settled down and toothpurring. Once I was sure he was calm again, I gave him a cookie and set him back down again and he went bopping off as if nothing had happened, but I'm sure he's not going to try that stunt again. Foo' wabbit. 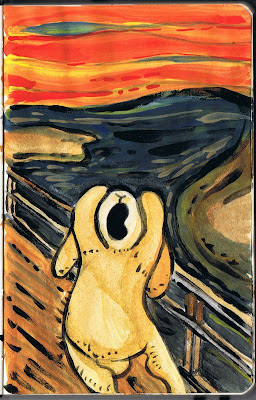 I must sign off now--if by some chance I do not get around to posting again before the 25th, I want to wish everyone and everybun a joyous holiday season: Merry Christmas, Happy Hanukkah, Happy Kwanzaa, Happy Festivus, and Happy Holidays from me and Mr. Mick!