...because this one's just not doing her job. 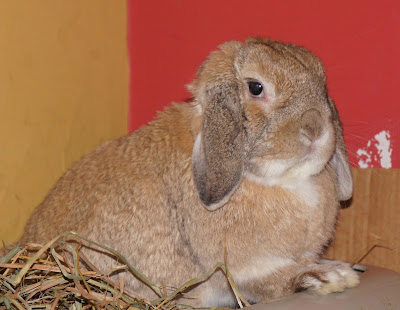 Honestly, for a human who spends so much time on the computer, you'd think Mum would be able to take a few minutes to update this thing--but no, I'm stuck having to sit here and type it all myself. Mum's new touchscreen computer doesn't make it any easier, either--do you know how hard it is to slap a screen and hit the right letter when you have fuzzy bunny paws?

It has been one rough couple of weeks, let me tell you. First off, I had to put up with The Boy being home last week. Fortunately, he wasn't as much trouble as he usually is; Mum kept him too busy installing the new computer for him to bother me, and he did manage to pet me a few times, but he's still a pain in the butt. I tried to help him with the computer (since he's a foo' human and doesn't know about these things), but he just kept shooing me away. I should have pooped in his shoes, but he hid them on me. Good thing he didn't stay very long. Mum says he's going to be back next month for something called "winter break", though, and that he'll be around a while longer. I'm going to have to make some plans...

There were a bunch of Mum's family here for that Thanksgiving thing you humans do--not that they paid much attention to me, they were way too busy eating and making noise. Mum did give me a nice fat baby carrot as a holiday treat, though. I would have liked to have more, but she said I couldn't because of my digestion issues. I said the only digestion issue I have is not getting more good stuff to digest.

To top all this off, Mum went and rearranged my lounge area. She said she had to clear the dining room out because of the company coming (she insists on calling it "the dining room" for some reason), but that is no excuse for moving my stuff around! She's even rearranged my footstools under the computer desk so I can only use one of them, and insists on using the other one herself! The nerve. I thumped at her repeatedly, but she refused to listen. Honestly, you just can't find good slaves these days.

I will credit Mum for one thing, though; she does make sure to keep plenty of hay cookies in stock for me. She made a batch late the other night so I would have something to nibble on. She even lets me lick the spoon once she's made them:


Tomorrow is her birthday, so I have graciously allowed her the day off to go shopping and buy herself some nice things (as long as she makes it back home in time to feed me, that is). I figure if I do something nice for her, she'll have to do something nice for me, like maybe give me another baby carrot or something.

Speaking of gifts, I got a really nice Christmas card from my pal Speedy and his mum. Thanks, guys! Mum will be sending out my Christmas cards soon, too--along with a few gifts as well...

Ok, my paws are getting tired and I am way overdue for my pre-lunch nap. Hopefully Mum will see this and get the hint, so you'll see some more posts soon. Later!
Posted by Jade at 2:38 PM 13 comments: