A: Weekends and holidays when the vets are closed

Q: When do bunnehs always choose to get sick? 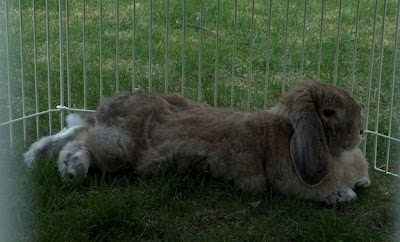 Never fails, especially with Mr. Mick. I swear, he never comes down with anything requiring an unscheduled vet visit unless they're closed.

Case in point: this past Saturday. My best friend since 3rd grade made an unexpected visit, and since it was a lovely day (and my house was a mess), we spent the afternoon outside sitting at my picnic table and sipping flavored seltzer water. Mick spent the afternoon in his x-pen next to us, nibbling on grass and relaxing in the shade. 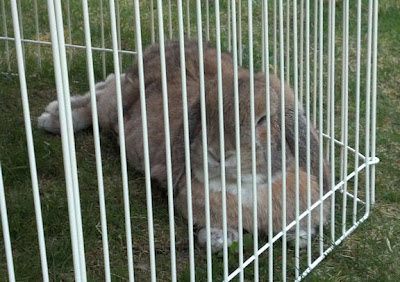 "Somebody get me a carrotini."

Now, this was the second time he'd been out that week in the exact same spot and he'd nibbled the same grass and bopped about all the same, so I didn't think anything of it...until I went to let him out for his nightly run and he refused to budge. I figured perhaps he was tired from his afternoon outing, so I left the cage door open and went into the dining room, thinking he would come along eventually.

About an hour later I went over to the cage and looked in. He was all the way in the back of the cage in his loaf position, just as was when I'd opened the door; not hunched up, not showing any signs of pain, but not budging. Uh-oh...


I took him out, set him on the table and began checking him over. Tummy felt normal, his ears were a little on the cool side, he seemed a little lethargic but not to the point of concern. I syringed some water into him and gave him a full-bunny massage, which perked him up a little, but he hopped right back into his cage the minute I put him on the ground and went right back to the same spot and same position as before. I offered treats, oats and greens, none of which he took--a sure sign that he was not feeling well. I left it all in his cage and went to bed, hoping that this was just temporary and by morning, he'd be fine.

Unfortunately, Sunday morning came and nothing was touched. I brought him out again, syringed more water and some Critical Care into him, then wrapped him up in his flannel sheet to warm him up a bit before making him run around the house in the hopes of stimulating some appetite. He was not at all happy with me doing any of that; he kept trying to escape into all his tunnels and hidey-holes, but I had them blocked. After a brief run, I scooped him up and gave him a tummy massage again, then put him back in his cage and hit the yellow pages to see if I could find a 24-hour vet that knew how to treat rabbits. There was one a short drive from home; I called and was told that yes, the doctor has taken care of rabbits and they would page him immediately. I hung up and waited from the doctor to call me back...He never did.

In the meantime, my son reported that Mick had taken a single piece of oat from him, but nothing else. I took a look in Mick's litterbox and found a pile of about a dozen poops covered with loose cecum. I brought Mr. Mick out--he was in need of a butt bath. (First time I was ever happy to see a poopy butt in my life.) I cleaned him off, bunny-burritoed him up in a towel and gave him a snuggle and a tummy massage. On impulse, I got some of his oats and offered him a pinch; he snarfed it up like he hadn't eaten in a week. I gave him another pinch and then brought him back to the kitchen and gave him some Critical Care before putting him back in his cage.

That night, I brought him out again; he needed another butt bath, so again I cleaned him off then wrapped him up and brought him into the living room for a snuggle and massage. He was definitely feeling better; I got my face licked for over an hour and there was much tooth-purring to be heard. I set him down and made him run around a bit again; when I put him back in the cage this time, he was a happy, hungry bun again. 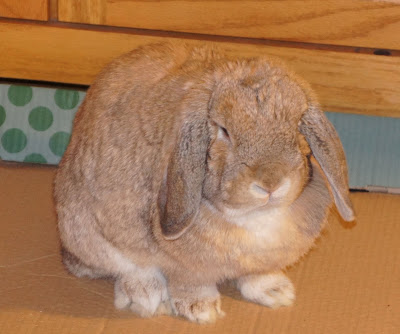 "Feeling much better, Mum! No need to see the vet, right?"

Monday morning, I called the vet. Even though Mickey was definitely back to normal, I wanted to be absolutely sure. Dr. Shanahan looked him over; his temperature was normal, but on the cool side (probably because of yet another butt-bath given before we left the house), his tummy sounds were good and his tummy felt fine. She gave me a mix of probiotics, vitamins and minerals in powder form for me to mix with water and give to him for the next few days, so three times a day His Majesty gets a couple of syringes of the bunneh equivalent of Powerade. It's definitely made an improvement; no more butt baths, poops are looking good, and Mick is definitely feeling and acting perkier. 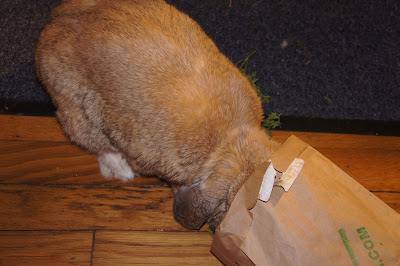 Fetching himself a snack of dried carrot tops. 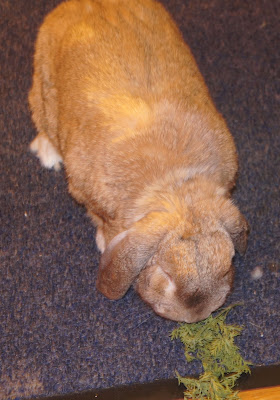 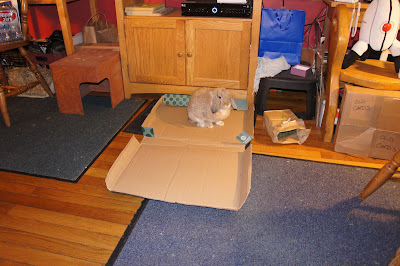 Taking a moment to pose for the fans.

I'm still a bit annoyed at the 24-hour vet who never called me back; it's the second time that a vet I've called in an emergency hasn't responded, but apparently I'm not alone in this. Dr. Shanahan said another client went through something similar; the client told her they'd called over a dozen vets and Valley Vet was the only place that had called her back--and they're not a 24-hour service. Go fig.

I'm just glad it all went well this time. Now, if somebunny would stop waiting until the weekend to get sick... 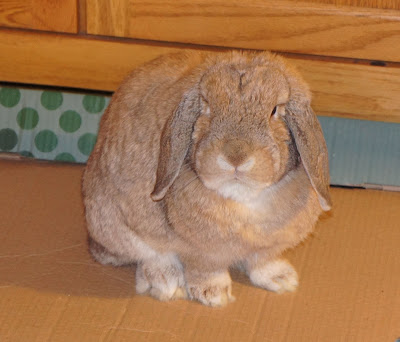 "Feh, if you were the one getting a thermometer stuck up your butt,
you wouldn't be too eager to go there yourself. "
Posted by Jade at 5:27 PM 26 comments:

I must thank Karen of Rabbits Eat Quilts for this, since she is the one who sent me the link in the first place.

This is my latest purchase--does this look like anybunny you know? 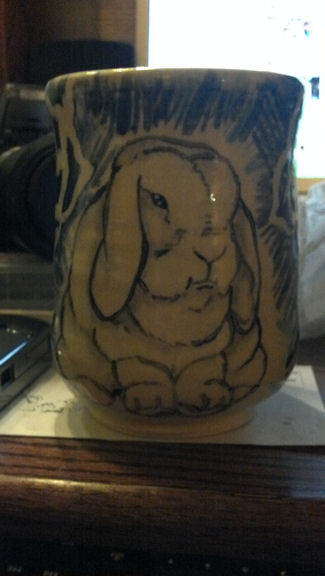 I got this on Etsy.com from a store called The Earthen Cavy (seriously, how cute a name is that?).


Now, Mr. Mick isn't quite that pudgy, but the resemblance is definitely there: 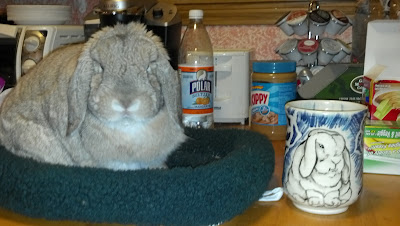 Mr. Mick got a chance to star in a blog other than ours recently. The reporter who wrote about February's Rabbit Rally at Petco wrote about him in her blog as well--and included some of the pictures she took, so His Majesty the Miffed is feeling much better. 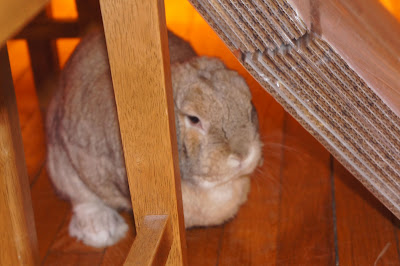 "All I ask is for the spotlight I am due as an internet superstar,
is that so very wrong?"
Things have been pretty quiet here, mainly because I have been very busy putting stuff off as long as possible. (Hey, The Queen of Procrastination has to defend her title once in a while.) I managed to get our taxes filed, although I still need to do the quarterly payroll taxes. I finished one of the baby blankets on my list and started another for the same recipient, but I want to finish the throw I'm making for friends before I go back to that. I actually still have one Christmas decoration still on display that I need to put back before Christmas comes around again, but I'm planning on doing that as soon as I get this posted. 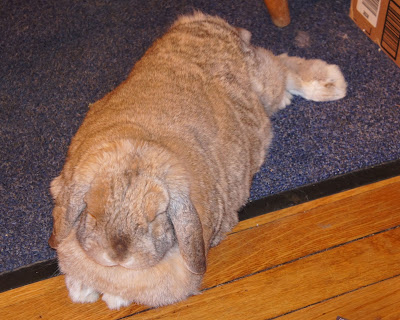 "Hmph...just lazy if you ask me.
Honestly, I don't know where she gets it..."
(WARNING: Icky poop talk ahead!)
Mr. Mick has been having some digestion problems recently. To put it impolitely, he's been having diarrhea during his out-and-about sessions. I've ruled out his treats because they've never caused it before, even when he's eaten more than his share. I ruled out his thrones because it only happens when he's outside of his cage. He's chewed on the baby gate that keeps him from the living room, but it's never caused him this kind of problem. The only other possible culprit is his cat tunnel, which up until last night was parked next to his hidey-hole box. Possible scenario: while lounging in his box, somebunny decides to chew or lick the fuzzy interior of the tunnel--and ends up ingesting some of it. I moved the box to another spot and replaced it with his cardboard tunnel, since Mick will only run through the tunnels instead of lounge in them. If I have to, I'll put the cardboard tunnel where the cat tunnel is (cat tunnel doubles as cord-blocker) and find a way to cover the fuzzy lining of the cat tunnel, but there were no problems last night, so I'm hoping things are fixed. I'm also offering some more acceptable things for him to nibble on: 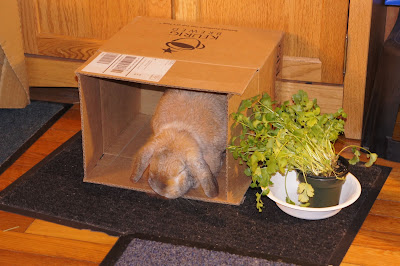 "She calls this acceptable?! Please.
Now, perhaps if there were banana or apple chips..."
Mick and I want to wish everyone and everybun a Happy Easter and a Joyous Passover--and may all your Easter bunnies be chocolate ones! 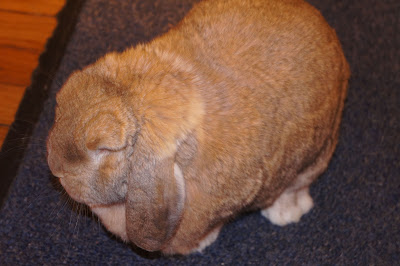 "Hmmmm...I think I'll leave the boy a nice Easter present.
Now which pair of his shoes should I poop in?"
Posted by Jade at 4:09 PM 14 comments: