...I wasn't planning for it to be like this.

Up until a couple of days ago, Mr. Mick was doing just fine. Eating like always, putting out poops that any good Poop Inspector would have been proud of--until this past Friday, that is, when things got very weird.

It started when I went to feed Mickey on Friday afternoon. I noticed that he hadn't eaten some of the basil I had given him the night before. I didn't think much of it at first, just dismissed it as having given him too much--but then I saw that he hadn't eaten much of his pellets. That was not exactly unusual for Mick, either, but combined with the leftover greens, it had me a little concerned. Mickey didn't appear to be having any problems wanting food, though; the minute I opened his cage, he was all over me hoping to get some treats. I gave him his usual papaya tablet, cleared out the old greens and gave him some fresh cilantro. He nosed at it a bit, then started eating. He didn't attack it with as much gusto as he normally does, but I figured okay, he's eating, it's all good.

That night, when I let Mick out for his run, he bopped around and demanded petting as he always did. No signs of any illness or discomfort; I gave him a belly rub and his tummy didn't feel swollen or hard. I figured I was overreacting...but then I checked his litterbox. His poops had shrunk to about half their normal size. Uh-oh...

I scooped up Mick, brought him into the kitchen, gave him a couple of syringes of water, some Laxatone that I still had from his hairball incident, and some Benebac, then I put him back in his cage and gave him some romaine lettuce to eat. He nosed at it a bit, then started nibbling at it.

In the morning when I checked on Mick, there was still some lettuce left and the litterbox in his cage showed no signs of poop. I called my vet, but it was 11:45am and they close at noon on Saturday. I called the emergency vet in my area, but all I got was voicemail. (I left my name and number and a brief message, but they never called back.)  I took him out of his cage and syringed some more water into him, then massaged his belly for about half an hour. He licked my face and toothpurred. I put him back in his cage, switched out his oat hay for a fresh batch, tossed the untouched pellets for a fresh batch, and emptied out his water bowl and gave him fresh. At the last minute, I added a bunch of orchard grass; he appeared to take a nibble, so I left him to it, hoping I had solved the problem.

Since then, there have been no real changes. He's still doing all the "big 4"; his poops are a little bigger, but still not normal, and I'm finding some hair in them. His eating habits are still weird as well; he will be all over me wanting treats (I've cut him back to only papaya tablets), then when I give him greens, he'll nose at them as if he's looking for something before he finally starts to eat them. This is totally unlike him; normally, he'll tear into his greens after he gets his treats, even if it's only a papaya tablet.

There is only one thing that might explain everything, and even then, it's a little weird. I've started buying the occasional bag of salad mix because the greens at my local grocery store haven't been the best recently. Last week, I bought a bag that was a mix of radicchio, some odd lettuces, and shredded carrots. Mick would nose through the mix, pick out the shredded carrots to eat first, then eat the rest. The day after I used the last of the bag is when all of this started--and I wouldn't put it past His Majesty to decide that if he wasn't going to get shredded carrots in with his greens anymore, he wasn't going to bother eating anything else.

I'm calling my vet tomorrow and bringing in Mick for a checkup just to be on the safe side, but if that prima donna thinks I'm going to be buying that salad mix again, he's sadly mistaken. 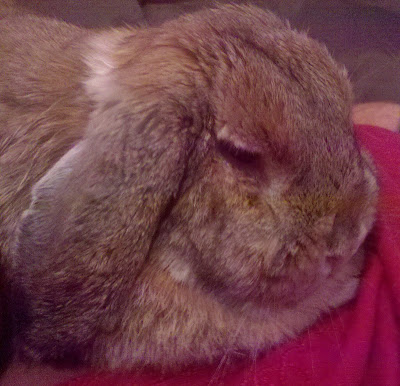 "Hmmph...can't blame a bun for wanting a proper meal..."
UPDATE: Monday 5/23 1:50pm
The vet's visit has been postponed for the moment; poop inspection shows good improvement, and pellets have been eaten. I am going to continue to keep an eye on things and see how it goes. For now, it looks like somebunny decided he wanted to get more fancy salad mix, but he's completely out of luck now.
﻿
Posted by Jade at 1:03 AM 15 comments:

Thanks much to all for the Mother's Day love. Hubby and I had a lovely dinner at one of the fancier places in the area, and Mr. Mick and I had a nice long snuggle once I got home and changed into something worth shedding on. Here's one of the bestest parts of my Mother's Day dinner: 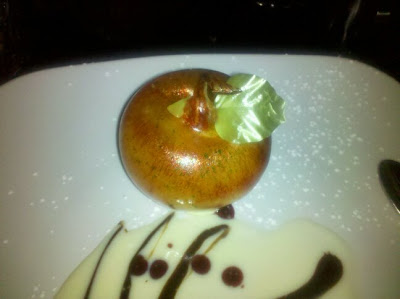 (apologies for the crappy cell phone pic, but it was all I had)
Looks almost exactly like an apple doesn't it? The picture doesn't really do it justice; the detail was quite amazing. It is an apple--a hand blown candy apple!
And inside... 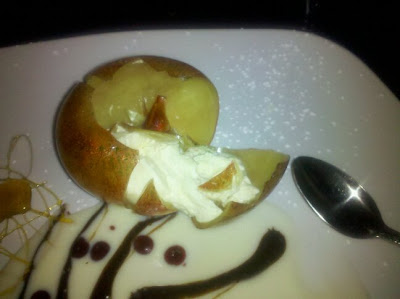 ﻿
Apple mousse! Almost exactly the color of the inside of an apple, and the flavor was light and subtle, almost like eating a real apple--except that real apple skin doesn't crunch and get all sticky in your mouth. :)

There was the briefest glimpse of sunshine a few moments ago--we've had grey skies and too much rain this whole week. I have been considering commissioning an ark to be built if I don't see some sunny days soon. In the hopes of inspiring some brightness outside, I have been doing a little spring decorating inside, and I hauled out my collection of bunny salt cellars. 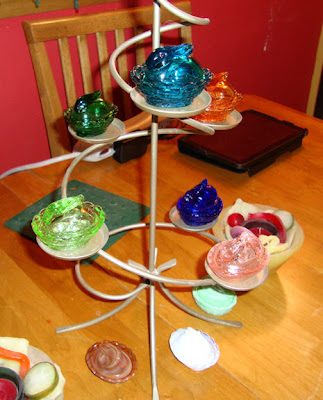 These are also known as salt dips, and they were once used instead of salt shakers. Each one is in the shape of a bunny in a basket (the bunny is the lid), and they come in all kinds of colors. I also have some larger versions; same style, but candy dishes instead of salt cellars. 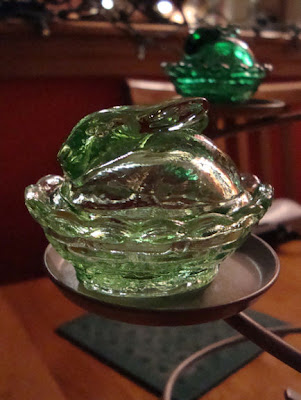 This is a closeup view of one; I usually sit them near a window so the sunshine hitting the glass brings out all the lovely colors, but I decided to make them a table centerpiece for once. Bringing them out inspired me to add to my collection, so I had to go on eBay and see if I could find some new pieces. I placed bids on two cellars (ruby red and marigold colors) and a green candy dish, put another cellar on my watch list and was able to buy one cellar immediately. What color was it? Sunshine, of course! :)
Posted by Jade at 10:06 AM 8 comments: 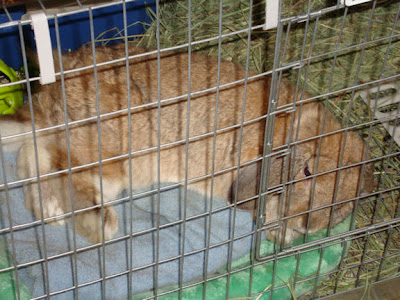 Hey all, Mickey here. Since you humans are celebrating Mother's Day today, I told Mum I would handle the blogging detail for today.

(Mum says to ignore the mess of hay in the pic; she's cleaned the cage since then--sheesh, Mum! They know that!)

Mum and I celebrated our 3rd buniversary together last Sunday, something she apparently forgot to mention because she was too busy talking about that silly Boy of hers. Hmph! Just because she went and gave birth to him does not make him more special than me--after all, she chose me, didn't she? He's just been lucky to have been around longer.

I will be a gracious bun, though, because it is Mother's Day, and I have a bunny-mum who has loved me lots for three years now. I will admit, there have been a few times when she could have been less loving (like when she clips my nails, or washes my butt, or cleans my cage, or takes me to the vet...) but overall, I'm happy that she chose me out of all the other rabbits at the humane society.

The Big Guy and The Boy also appreciate all she does for them. They gave her some nice gifts for Mother's Day: 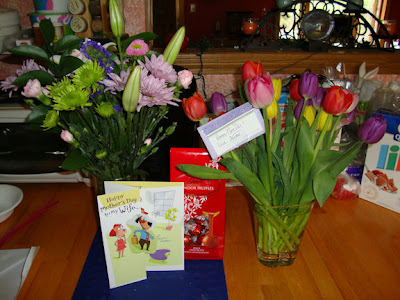 (The Boy also gave her a card, but not until after the pic was taken.
Wouldn't let me sample the flowers, either...)﻿
I gave her my usual: lots of nose bonks and bunny kisses. She says she never gets tired of those. The Big Guy is taking her out to dinner tonight, so I'll surprise her with some snuggles after they get home.

I hope the rest of you are taking the time to show your bunny-mom (or your human mom) how much you love and appreciate her. After all, she did/does an awful lot of stuff that nobody else would do for you....unless you have somebody else wiping your butt, in which case I don't want to know about it.

Now, if you'll excuse me, I need to catch a bit of a nap before tonight's snuggle session. Happy Mother's Day to all the moms (and bunny-moms) out there! 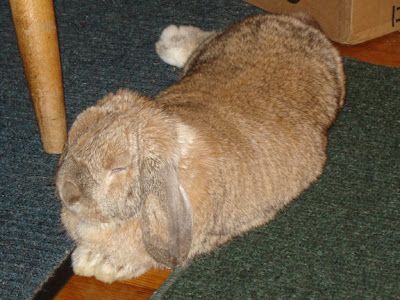 The Boy and The Rabbit 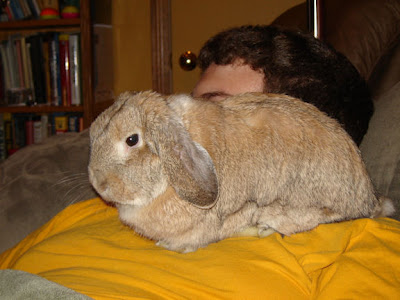