A Word from Mr. Mick 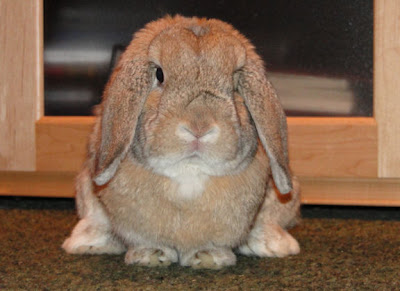 Yes, I know we've used this pic a lot lately,
but hey--it's a damn good picture of me.
Hey all, Mickey here.
Just wanted to let you know that we are all safe and sound here in MA. Other than losing power for about 4 hours very early Saturday morning, we got through that fershlugginer hurricane just fine. Personally, I spent the weekend either sleeping on my throne, snuggling with Mum on the couch or bugging Mum and The Boy for treats and petting (and humping their feet if they didn't do what I wanted), Mum says she is going to change my name to Prince Humperfoot if I don't cut it out.
Anyway, that's all for now. My new throne is calling my name and I cannot resist. Mum will post more when she gets a chance. ﻿
﻿
Posted by Jade at 5:56 PM 10 comments:

Mr. Mick has been a rather grumpy despot this past week, mainly because he has not had a proper throne to sit on. The two he had were in dire need of washing, but there wasn't enough laundry that I could add them to in order to make a full load of laundry. Last Monday, when I cleaned his cage, I put a pair of folded towels inside instead of one of the thrones.

You would think I had given him a bed of nails.

There was much flinging of anything that wasn't anchored down; his hay basket, his jingleball, his keys, his toy chain. I was repeatedly subjected to both the Bunny Butt O'Snub and the Dread Glare O' Sulk. The towels themselves were pushed around and clawed at--until somebunny realized that he was going to need something to park his fuzzy butt on that wasn't his cage floor.

Suddenly, the towels weren't so bad after all.

A few days later, there was a package from Leith Petwerks . It couldn't have come at a better time.
Inside the package: 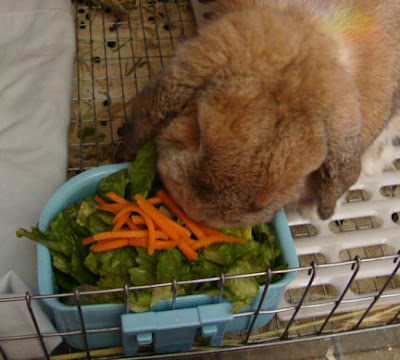 A new bowl for Mr. Mick's salads, because somebunny has a nasty habit of flinging any bowl or plate that gets put in his cage, even if there is a pile of greens on it.
AND
A brand new throne. 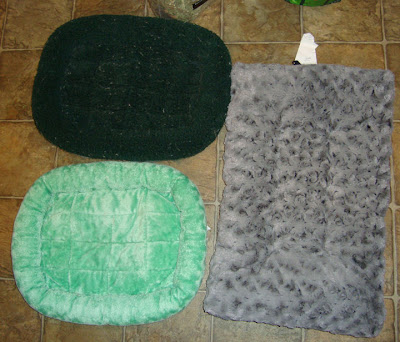 These are Mick's assortment of thrones; the pale green plush was his first, followed by the large gray plush and the new dark green fleece. The new throne is not as soft as the other two, but that didn't seem to bother His Majesty at all. He was snuggled up in it practically from Day 1, and let me know that I was forgiven for the moment...
...until today, when I washed all three thrones.
He has his gray one in his cage now. As soon as I put it in his cage, he had to give it a thorough inspection: 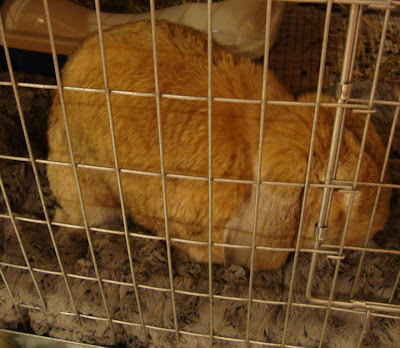 "Did you remember to use the dryer sheets?
I am NOT going to be happy if my fur gets all static-y." 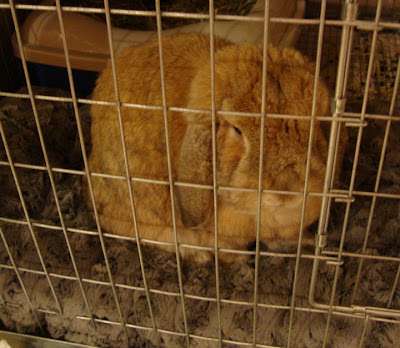 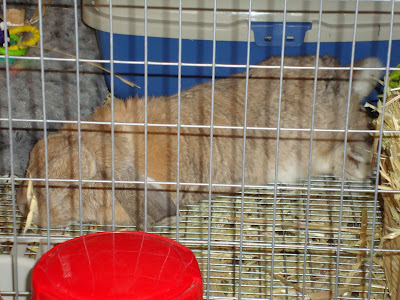 As you can see, Mr. Mick is too tired to share the good news, but he had his follow-up visit with the vet today and he has received a clean bill of health! YAY!
Dr. Shanahan said that, while she could still feel the spot under his skin where the abscess was, it was a very small pocket in the muscle and it feels much like a deflated balloon--nothing in it. We will have to keep an eye on that spot to make sure that "balloon" doesn't inflate again.  Other than that, he is a healthy, handsome boy. His weight has stabilized at 4lbs, 10 oz., which is still much smaller than he was previously (he had been at 5 1/2 lbs. before he got sick), but oddly enough, he feels like he is heavier than he is. For gaining all of three ounces since his illness, he is more solid and his bones do not stick out nearly as much as they had before. If you asked me to guess his weight before he hit the scale, I would have guessed at least 5 lbs. His vet and I discussed it, and much as I would like to see him weighing at least 5 lbs. because of how he dropped so much weight before, this seems to be a good weight for him for overall health.
Of course, he may end up putting on some extra ounces now that I got him a new treatball. He still has the old one, but I also found this  on Amazon.com. It has adjustable holes and fills much easier than his other one. I'm saving the old treatball for his papaya mini-bits, but I break up Oxbow veggie treats for his new one. Mr. Mick has already figured it out and was happily pushing it around all over the dining room to get every treat out. I may also break up some of his papaya tablets and add them to the treatball as well.
I'm also been trying to teach Mick to hop up on the footstool under my computer desk. He's done it a few times on his own, but never seems to want to stay up there for very long, so I've been trying tempting him with bits of dried kale. If he does it on command, he gets petting, praise and the treat, but if he does it on his own without my command, he gets petting and praise but no treat. The idea is for him to do it on command and not when I don't want him there. We'll see how it goes. ﻿
Posted by Jade at 12:55 AM 15 comments:

The Return of Mr. Mick

I had forgotten about this treatball until recently, when I saw an article about a similar toy and realized that I could use Mick's papaya and pineapple mini-bits in the one I had. Of course being that treats were involved, he figured it out pretty quickly. Usually, he just picks it up and flings it until all the bits are out, but this time, he finally used it as he's supposed to.

He is doing quite well; the lump where the abscess was seems to be getting smaller and does not feel like it's filling up with ick again. We are keeping fingers and paws crossed for a clean bill of health when we see his vet again on the 10th.
Posted by Jade at 3:41 AM 12 comments: