The End of the Story

I was so planning on this being good news to report, but as always, somebunny likes to make a liar out of me.

It's been a busy year and a half since I last posted. If you've followed me on Facebook, you're probably more up to date on his antics, since it's quicker to post a note and a pic there than on here. Mick's teeth never got any better, but they never got much worse. We never did need to have any of those pesky molars removed, thank gawd. Mick's seventh birthday came and went (and more recently, his eighth), and I meant to sit down and write a blog post about both, but there never seemed to be the time.

Around Thanksgiving 2014, Mick became very ill very fast, and my holiday season was spent running him back and forth to the vet's to try to figure out what was wrong. Turned out it was a three-fold operation; x-rays revealed near-crippling arthritis (so bad that his vet was amazed that he was still able to hop), bloodwork revealed liver disease (most likely caused by the inflammation brought on by the arthritis), and an ultrasound revealed a thickening in his stomach lining that might or might not have been a tumor. He was put on pain meds for the arthritis, stomach meds for any irritation caused by the pain meds, and sub-q fluids every other day. I learned how to do sub-q, and my kitchen table became Mick's medicine cabinet. It paid off, though; before long, he was bopping about as if nothing had happened; a little slower bop than before, but still bopping about. 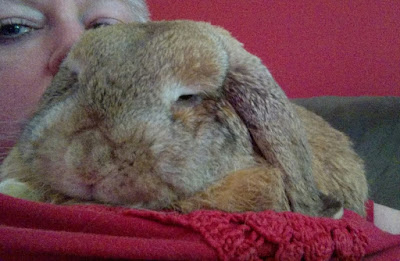 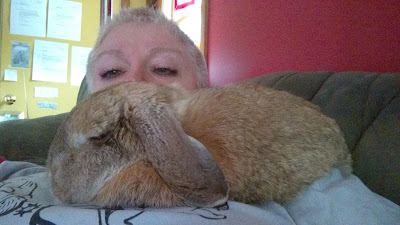 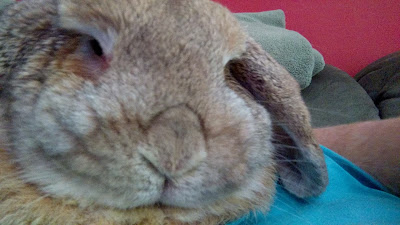 
No idea why he decided they needed bossing around, but he made sure they knew he was in charge every night.

Last month, we started laser treatments on his hind legs and pelvis in the hopes of improving his mobility and getting him off the pain meds eventually. The treatments seemed to be working; he was starting to explore again, and got himself into mischief on at least one occasion going places he shouldn't.

Between the treatments and the meds, I was hoping to have a couple more years with him. He made it to his eighth birthday which, considering all his health issues, was no mean feat. I was telling everyone how well he was doing...

He stopped eating the day after his birthday. His teeth were causing trouble yet again, so they were fixed. His vet said that one had been slightly fractured at some point, and that there might be some infection going on, so he got antibiotics. Even after the antibiotics were done, though, his appetite wasn't what it should be, so he got vitamins and more antibiotics. That seemed to do the trick; he was perkier, eating, getting busy...

I cleaned his cage this past Monday night. It was still clean the next day. Mick's cage is never clean for more than an hour. He wasn't pooping.

Today, I brought him to the vet's for one more checkup--and his vet found a small mass on his intestine.

I had hoped for two more years.

It was not meant to be.

Mr. Mick left this world this afternoon. He left peacefully and painlessly, snuggling with his incompetent slave one last time before he departed.

When his predecessor, the late, great Karnage, died seven years ago, I never thought I would find another rabbit who would fill the large chunk of my heart that he took. I was beyond blessed when Mick came into my life--and now the little bugger's gone and stole all the heart I had left and run off with it. Foo' bunneh.

There will be another rabbit--I cannot bear to see an empty cage, and I believe that the best way to honor Mick is to give another rabbit a chance at a "furever" home.

There will never--EVER--be another Mick. 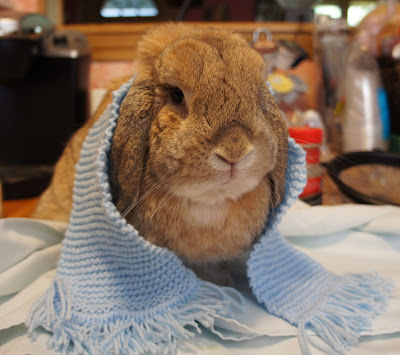 
UPDATE, July 3, 2015: Thank you so much to everyone and everybun who commented on Mick's passing (whether on here or through FB, email, etc.) I have been overwhelmed seeing the impact that my grumpy loveybun had on so many people. Mick was a most special rabbit, to be sure, and I know he would be thrilled to know how many people cared about him.

Much love to you all,
Jade

You are right. There will never ever be another Mr. Mick. Huge hugs to you, Jade. Oh, Mick ... we shall all miss you so. Love, BL

No...there will never be another nephew quite like him. I'm so sad....Love to you Jade and love to you sweet boy. Auntie Shell will miss you so much and always remember you.

My deepest sympathy for the loss of your furbaby. In pain no more Mr. Amick. RIP

RIP Mr. Mick - you were part of so many lives for so long! I will miss you too.

Oh heck,damn it Mick we miss you already,love to you Jade we are so sorry your boy king has gone,no more grand adventures a sad day indeed,xx Rachel and Speedy

so sad, Mr Mick was such a superstar bunny!

My deepest condolences to this majestic crusader of life. Let his hop ever be light, and let his light ever hop in your heart.

oooh my sweetheart darling!!! I love Mickey :) and always will! Shedding tears here Jade :) xxxxx <3 all my love Annette xxxxx

So very sorry to hear the sad news. I loved reading of his adventures with Speedy. Good bye Mr. Mick you will be missed.

So sorry to hear about Mr Mick's passing. We have always enjoyed reading of his antics, he was a wonderful bunny.

Deepest sympathies and big fluffy hugs from myself and Whisky.

I thought sure I commented here as well as FB. Apparently not. We miss Mr. Mick. It is never easy to recover from the loss of those we love. I am glad that you have Miss Lola now.